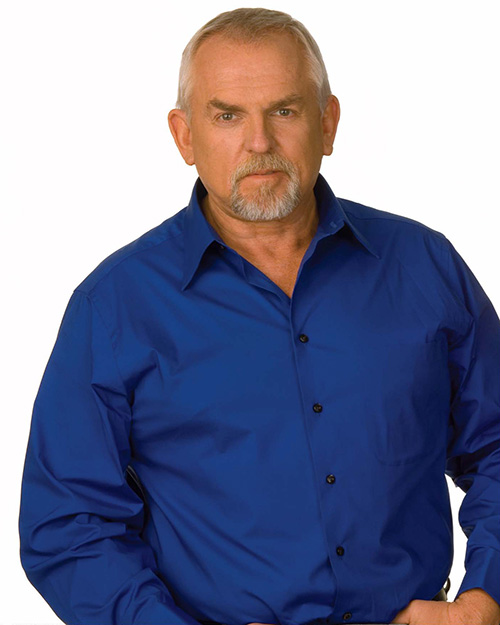 During more than three decades of movie making and theatre, John Ratzenberger has enjoyed success as a screenwriter, director, producer and multi Emmy-nominated actor.  He is also an accomplished entrepreneur and philanthropist.

John’s career began in earnest in the early 1970s, when he formed the improvisational theatre duo “Sal’s Meat Market,” which performed to standing-room-only crowds throughout Europe for 634 straight performances.  To help pay the bills, John also worked as a house framer, archery instructor and deck hand on a fishing boat.  Learning a few trades allowed him to pursue his dream of acting.

In 1982, John accepted a writing assignment for CBS in Los Angeles. On the day he was scheduled to return to London, he auditioned for a role on the upcoming Cheers. At the time of his audition, the character of the postman did not exist. As he walked out of the room, he turned and asked the creators “Do you have a bar know-it-all?”  They didn’t know what that was, so John gave them five minutes of improv, demonstrating exactly what it meant with the perfect Boston accent. They loved what they saw and Cliff Clavin was born.

In the history of television, only a handful of series have achieved the worldwide success of Cheers, on which John portrayed Cliff for the show’s entire 11-year run. To this day, thanks to daily syndication, Cliff continues as one of America’s most beloved characters.

John’s latest project is a partnership with actor and director Kevin Sorbo in the upcoming film East Texas Miracle – a faith-based project (a genre John is very active with).  In all, John has acted in 38 major motion pictures including blockbusters such as Superman, Star Wars: Episode V –The Empire Strikes Back and Ghandi to independent films like his hit The Woodcarver. He has written, directed or produced hundreds of television projects over the span of his career making him the 6th largest grossing actor of all time based on box-office receipts.

Since climbing off the barstool at Cheers over a decade ago, John has immersed himself in what makes America great, a country in which a truck driver’s son wound up being a TV icon. He wrote the book: We’ve Got it Made in America, A Common Man’s Salute to an Uncommon Country, a collection of essays from his five years on the road visiting factory towns throughout the country on the Travel Channel show “John Ratzenberger’s Made in America.”

John is Hollywood’s most outspoken advocate for American manufacturing, skilled labor and the companies that are the foundation of our great country, working tirelessly to shine a light on the importance of manufacturing and trades. He addressed the Congressional Manufacturing Caucus with his oft-quoted speech “The Industrial Tsunami Heading Our Way”; the House Small Business Committee on the “New Faces of Manufacturing” and the Senate Commerce Committee about “Saving American Manufacturing” – all three speeches detailed the crushing regulations on American enterprise and the fact that we are running out of skilled tradesman to fill the hundreds of thousands of available skilled trades jobs in America. To combat this issue, he works with legislators on both sides of the aisle to bring back trades training in schools, build apprentice programs for returning veterans and support the reshoring of American companies.

John created “Nuts Bolts and Thingamajigs”, a foundation that creates and funds manufacturing summer camps and scholarships nationwide – inspiring the next generation of inventors and entrepreneurs. The program took off and John eventually handed it over to the Fabricators and Manufacturers Association to run it.

In October 2017, John was appointed to the President’s Task Force on Apprenticeship Expansion whose mission is to identify strategies and proposals to promote apprenticeships, especially in sectors where apprenticeship programs are insufficient.

He speaks to groups across the country about eliminating the stigma around the trades while providing much-needed training opportunities for students, returning veterans and out of work Americans. “Our country’s infrastructure is falling apart and there aren’t enough skilled tradesmen to fill the jobs. Parents are encouraging their kids to go deep into debt to pay for a college education while more than half of our graduates are working jobs that don’t require a college degree.”  And for the innovators who are studying science, technology, engineering and math (STEM), they will need the final piece of the puzzle – manual arts including welding, machining, carpentry, etc. – to bring their ideas to life.  Technology is nothing without the skilled workers who turn that invention into an actual product (even if the product is the computer used to create the technology).

“My mother used to give me old radios and toasters,” said John. “She told us to take them apart and put them back together. Growing up, everyone we knew could make something and knew how to fix things.”  It’s the common-sense problem solving he learned as a kid that he credits for his role as developer and founder of ECOPACK, a biodegradable shipping material that replaces Styrofoam and is now used worldwide, most often seen as the shredded accordion paper used in gift bags.

Born on April 6th, 1947 in Bridgeport, Connecticut, John attended St. Ann’s School in Bridgeport, Sacred Heart University in Fairfield, Connecticut and presently sits on the University Board of Pepperdine University. John is an avid sailor, shooter, fisherman, and billiard player.  He plays the drums and belongs to a bagpipe band as part of the Emerald Society. He has one son, one daughter and lives in Connecticut with his wife Julie.

Ratzenberger’s work for Pixar, as well as his parts in Superman and The Empire Strikes Back, makes him the 6th most successful actor of all time, as measured by a total box office of over $3,000,000,000.

John also developed packaging alternatives made from biodegradable and non-toxic recycled paper as a safe alternative to Styrofoam “peanuts” and plastic bubble wrap.

John was a house framer living in London when he began his career in the performing arts. His first role was a Patron in The Ritz (1976). He appeared in minor roles in movies including Firefox; A Bridge Too Far; Superman as a missile controller; Superman II as the NASA control man; Star Wars Episode V: The Empire Strikes Back (1980) as “Major Bren Derlin”; Motel Hell (1980) as a punk rocker; Outland (1981) as a doomed mine worker named Tarlow, and Gandhi (1982), playing as an American Lieutenant.

John currently recurs on Legit on FX. He recently shot episodes for Bones on Fox, CSI on CBS, Drop Dead Diva on Lifetime, and Franklin and Bash on TNT.

Ratzenberger is best known for playing mail carrier Cliff Clavin on the sitcom Cheers. He had read for the part of Norm Peterson, but after the audition, he could tell they weren’t going to give him the part. Sensing an opportunity, he asked if they had written a bar know-it-all, which the producers decided was a great idea. Cliff became known for his outlandish stories of plausible half-truths, irrelevant trivia, and ignorant misinformation, and was known for being an overall pretentious blowhard. Cliff and Norm, the primary customer characters, became iconic bar buddies. Ratzenberger provided the voice for an animated version of Cliff on The Simpsons 6th season episode “Fear of Flying”.

John has had a voice part in all of Pixar’s feature films made to date. His roles include:

He also voiced the bathhouse’s assistant manager, Ao-gaeru, in the English dub of Spirited Away, a film whose U.S. executive producer was Pixar’s John Lasseter. Ratzenberger had the chance to make fun of his tenure at Pixar during the end credits of Cars, where his character, Mack, watches car-themed versions of Pixar movies (“Toy Car Story”, “Monster Trucks, Inc.”, and “A Bug’s Life”), notes that all the characters Ratzenberger has played were excellent, until he realizes that they’re the same actor, at which point he remarks, “They’re just using the same actor over and over. What kind of cut-rate production is this?”

Ratzenberger’s favorite of his Pixar characters was P.T. Flea, because “in real life I always get a kick out of those kinds of characters, people who just go into a rage for [no] explicable reason. He was always on edge. His blood pressure was always way over the top, and everything that he did was done in a panicked state. So it was a lot of fun to play him.”

John produced and hosted “Made in America”, a show for the Travel Channel, which established a television precedent and led the way for a new series of shows including: “Dirty Jobs”; “Deadliest Catch”; “Ice Road Truckers”; and more. These shows celebrate the work ethic that built America to be its strength.

John co-authored We’ve Got it Made in America: A Common Man’s Salute to an Uncommon Country, which was published by Time Warner.

John is on the boards of Pepperdine and Sacred Heart Universities.