Below is a list of Pixar movie characters John has played over the years. Learn more about his characters 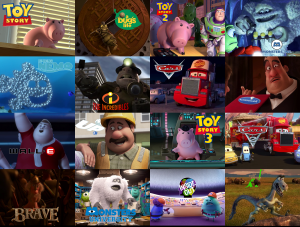 Coco – 2017
Did You Know?
He is John’s shortest Pixar part, with only one word of dialogue: “gracias”.

Brave – 2012
Did You Know?
Gordon is a Scottish guard of the Castle DunBroch.

Ratatouille – 2007
Did you know?
Mustafa easily gets nervous when dealing with demanding customers and critics, trying his best to please them.

The Incredibles – 2004 | Incredibles 2 – 2018
Funny Quote:
Behold, the Underminer! I’m always beneath you, but nothing is beneath me! I hereby declare war on peace and happiness! Soon, all will tremble before me!

Monsters, Inc. – 2001 | Monsters University – 2013
Fun Fact:
The Abominable Snowman is a yeti banished to the Himalayas

A Bug’s Life – 1998
Funny Quote:
P.T. Flea: I’m serious! Word of mouth got around, the next day there was a line of flies outside the tent, went on forever. It must have been a foot long!

Inside Out – 2015
Who is Fritz:
He is a greenish Mind Worker with a mustache and no hair who installs an upgraded console in Headquarters when Riley turns 12.

The Good Dinosaur – 2015
Fun Fact:
Earl is the velociraptor with blueish skin who speaks in a southern accent.

Soul – 2020
Fun Fact:
John only has one line as he plays a quintessential annoyed New Yorker